Everything you need to know about our upcoming FRINGE WORLD Festival.

Our 2022 Year 12 cohort comprised of a small group of 52 students with diverse skills and interests. We commend each one of them for all that they achieved, not only academically but also with the co-curricular activities and service-learning opportunities they have undertaken. Over the course of their final year, their learning was once again interrupted by COVID-19 challenges, but even so, they adapted and showed their resilience and determination in achieving their personal best. Below is a summary of their successes:

We wish all our students the very best in their future endeavours. Know that we are proud of you all and we look forward to hearing of your future successes. 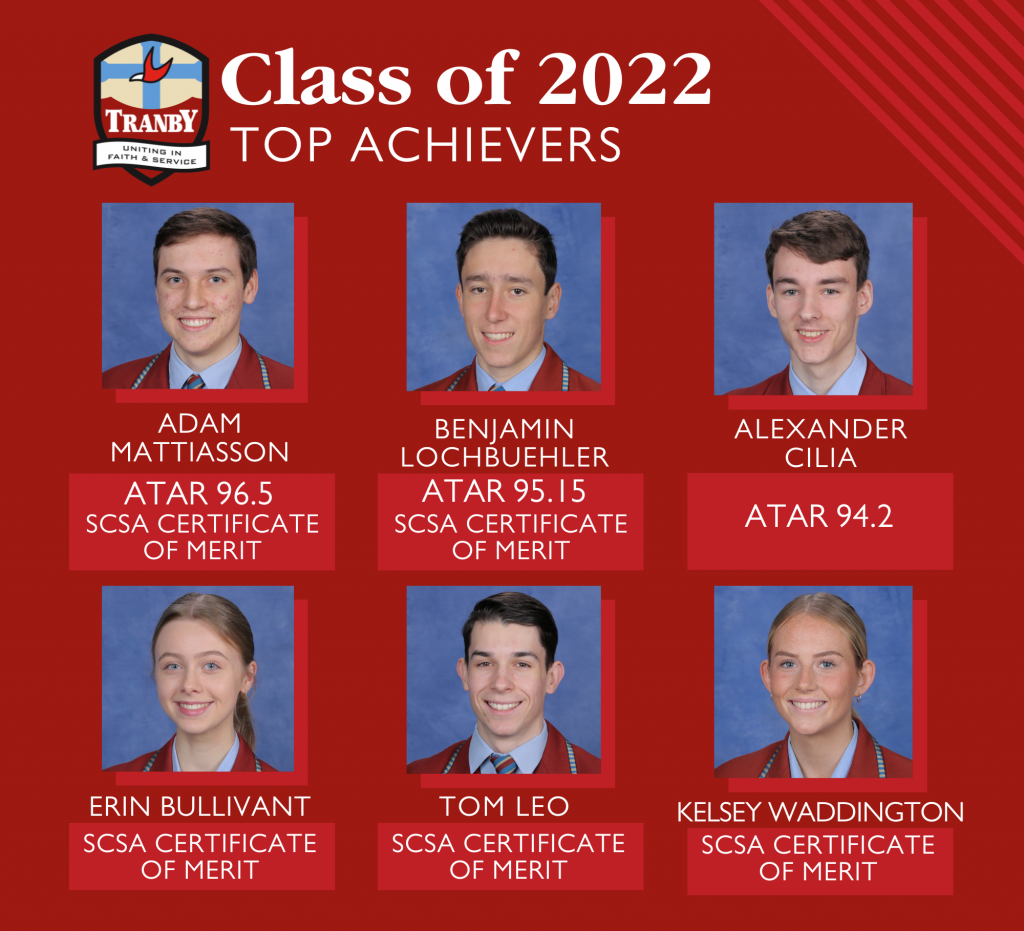 We are proud and excited to share news that Tranby College has been recognised by Microsoft as a Surface Gold School – a status which endorses the College’s outstanding level of excellence in digital teaching and learning. This accreditation is thanks to the work of Mr Anthony Britza, Director of Learning and Innovation, and our ICT Team, in preparing for roll-out of Microsoft devices across the College in the next three years. (See below for full details on our change to Microsoft Surface and the planned roll-out.)

For Tranby students and families, being a Surface Gold School means that:

In preparation for the roll-out, staff across the College have undertaken training and we are looking forward to seeing the benefits in 2023.

Moving to Microsoft Surface devices from 2023

Over the course of Term 3, 2022, Tranby undertook a review of our learning devices and systems. Current research into the use of computers in education identified three key factors we needed to consider:

Based on the above, we decided that a tablet or a 2-in-1 device would best suit the needs of our students. Google Chromebooks, iPads, Microsoft tablets, and 2-in-1 devices were evaluated. It was apparent that the Chromebooks would not meet our immediate or future needs. Upon comparing iPads and Microsoft, we felt that the Microsoft option would allow our middle-primary to Years 11 and 12 students the best of a tablet and desktop experience. Due to its application-based system, the iPad would not suffice all our needs. Upon evaluation, as a school, we selected Microsoft Surface as our new device (and this is being rolled out as per the table below).

Our latest College newsletter is now ready to read.

At the end of August and during early September, a number of workshops were held with students, parents and staff. At the workshops, College Principal, Ms Mahy:

A summary of what was presented and the outputs of these workshops are detailed below.

Since the launch of the Strategic Plan in 2021, the College has implemented an extensive number of initiatives to support the direction and growth of the College. A summary of key activities is detailed below (although it should be noted that this does not capture everything that has been undertaken).

When considering plans for our College and Campus, workshop participants were asked to think about what opportunities and improvements should be considered as part of Master Planning. Below is a summary of the common themes that came through across all groups that met:

What Happens with the Feedback?

Further to undertaking the workshops, the following has occurred:

Over and above this, the College will shortly be reviewing the data received from the recent MMG survey in order to identify additional priorities and opportunities. An update on survey data responses and further plans will be provided in early Term 1 2023.

Thank you to everyone who contributed towards the workshops and survey.

Twenty five years is a big deal. By 25 humans are considered to be adults – we have finished with school (although not with learning), we have passed 18 and the responsibilities and privileges that the law gives us at that age, we have even passed 21, which used to be thought of as the “key to the door” and, by 25, many of us have established our own families and are building careers.  It’s even said that by 25 the frontal lobes of our brains are fully formed and we are capable of controlling our impulses and of making wise decisions.

So at 25, we are considered to be adults taking our place in the world and making a contribution – just as so many Tranby graduates are doing.

Although the life cycle of a school cannot be compared to that of a human, after all a whole range of Australian schools are thriving at 175 years and more, it is interesting to reflect on Tranby’s first 25 years, to remember some of the things that have contributed to the journey thus far, to reflect on the contribution that the school is making and to consider what will sustain the school for the next 25 years and more.

But this is a task that is well beyond the scope of any speech tonight. As I have tried to distill the essence of the story of Tranby College, I have returned again and again to the concept of courage.  Not the adrenaline rush, reckless risk taking that popular culture associates with courage, but the courage to start something new, to persist when one obstacle after another is placed in your path and to be vulnerable enough to enter into reciprocal relationships with others, to allow others to help you and to grow with you.

It is the sort of courage that those Methodist farmers from Yorkshire exhibited when they  charted the brig Tranby and left Hull on September 9th, 1839,  heading to new opportunities in the fledgling Swan River Colony.

It is also the vision and persistence that the congregation of the Rockingham Uniting Church exhibited when, in the early 1990s, they started to talk to the church office about their desire to see a new, co-educational Uniting Church school operating in the local area.  They had seen the success of St Stephens in the northern suburbs and they wanted similar opportunities for families in this area.  But of course it wasn’t a straightforward journey.  They had to persist to convince the Church that it could be done- money and land had to be obtained, buildings planned and constructed, families attracted, a principal found and staff appointed.

In particular I also think of the courage of the foundation families and staff. They took an enormous risk to join this new enterprise. By the start of 1997 around 200 students were enrolled from kindergarten to year 8, approximately 20 staff were employed and the stage 1 buildings were complete- basically a hand full of classrooms, a library and admin building and a sandy oval.  There really was very little else.  Settlers Hills was also just stage one and you drove well beyond the houses to get to the school.  My husband, who attended the official opening on May 18, 1997, still talks about “traipsing through sand” to get to the activity area  in which the assembly was being held. When I arrived in the second half of the next year, I remember the then Head of the Junior School, Sandra McCullough, instructing the students to zip up their backpacks when they left them in the prescribed neat rows on the verandahs outside of the classrooms. This was to keep the snakes out- they had dealt with more than one unwelcome reptile visitor.

One of the other things that is always missing when a school first opens is a school culture.  Yes, Tranby wanted to be an inclusive school community, it wanted its students to be safe, learn and thrive but a shared culture or understandings about what is important takes time to develop.  You can have documents full of policies and procedures but until staff, students and families really embrace what the school is about there is no soul.  It is a bureaucracy that depends on hierarchy, rules and extrinsic rewards and that was never envisioned for Tranby.

School culture depends on trust which is built on shared values and understandings of “what is important around here”. When that trust develops members of the community do things because they are the right things to do and intrinsically they feel good about that.

But of course, culture and trust can be easily broken and lost. If a community is to continue to thrive, every member of the community has to take responsibility for ensuring they are participating and contributing in ways that are consistent with the underlying values and ethos that define the spirit of the school. And this is particularly so in an Independent school in which there is no head office or outside authority to blame.

As I started to think about school culture I remembered how different the school felt once we grew to have year 12 students- only about 14 in 2001 but the leadership they provided was more valuable than they really would ever know, and the same is true of every year 12 group since then.  I’d like the current year 12s to think back to their earlier years at the school.  How many of you had an older student whom you admired or looked up to.  Please put your hand up if you can think of an older student who you thought was pretty good, who you wanted to be like.  Now, keep your hand up if that student knew that you admired them.

Yes, this role modelling was happening even without the older students being aware of the influence that they were having.

And I am sure that there are adults in the room who have had a similar experience.  We are all influenced by those around us and in turn we influence those around us and this places a profound responsibility on us, throughout our lives, to be the best people we can be- to create lives that are good.

But this is not easy which brings me back to courage.

My grandchildren and I have recently discovered a wonderful little book called “The Beatryce Prophecy”.  It is a fantasy about a young girl called Beatryce and her quest to overcome the danger that she is in and to fulfill her destiny of becoming the ruler of the kingdom. She is helped on her journey by a mild mannered monk who finds that he has to be far more brave than he had ever imagined he would need to be. At one point in the story he asks “what does it mean to be brave?” He answers himself:

To be brave is not to turn away

To be brave is to go forward

To be brave is to love

As young adults leaving school you do need to be brave enough to continue to embrace and live the values that you have come to believe are important. Do not turn away from them.

It depends on every member of the school community, particularly students and staff, taking the responsibility to enter into reciprocal relationships based on unconditional, positive regard.  It depends on treating each other with respect and of holding ourselves and others accountable when we fall short of this and then seeking to do better.

There is no doubt that the school has weathered, and indeed been strengthened by, many storms. Through this it has grown from humble beginnings to establish a reputation for nurturing every student, for recognising the strengths and talents of all and for being a centre of educational innovation.  This is worth celebrating and courageously pursuing into the future.

Best wishes as we all seek not to turn away, to go forward and to love.

Tranby College is excited announce the launch of a new High-Performance Cricket Program for students in Years 7 to 10.

Enrolments are now open for Kindy 2024.

Read all about our recent Anniversary Fair, see photos and find out who won prizes!